Please tell us, what do you write?

The Twenty-One-Year Contract is a standalone, just like its prequel Secrets, Shame, and a Shoebox. Both are 20th Century Fiction>romance>drama>crime>mystery>suspense. I didn’t realize when I started out, but generally I write romance, filled with characters that have something to say and plot lines that are real life. What happened in history still happens today. I aim to expose that fact.

Do you believe that characters are the most important part of your stories?

Characters wake me up in the middle of the night shouting “hey listen to me, I’ve got something to say, come on write it down!” How can I possibly ignore them? Their stories about strong women, courage, and survival. They are real, honest, hardworking. Though of course some are not so much. There’s always the villain that everyone loves to hate.

Then there’s those who read my books and tell me something that makes my day. One said, after reading Secrets, Shame, and a Shoebox, “I’m so glad Harriet was fired from her job. At least she didn’t have to put up with that dreadful employer!” Another person said, “I hated that CJ. What a monster!” My heart sang. It’s such a compliment and so heartwarming to know that they’ve enjoyed my book. It means that I have done my job. What more can I ask? I’m truly humbled to think my stories provoke thought and emotion.

What’s the fun part of writing and why?

I love the way the characters grab me by the hand and lead me along paths I could never have dreamed of. They tell me what they want to say, and what’s going to happen next. Who would have thought it? I love that, and I love them. They are survivors, though they don’t see themselves that way, they sure are!

Why did you write The Twenty-One-Year Contract that you’re talking about today?

I’m an observer of life. Like most writers I imagine, and I’ve been fortunate travel and to have worked alongside and taught some amazing people. Those I taught in return taught me. I’ve admired their strength of character, their courage, and will to live. I learned so much from them it has been astounding. Both my published books are standalone.

Then there are those coincidences. How many times have you been on holiday and bumped into someone you know in a far-flung country? Or met someone that you knew as a child and found lived for years just a stone’s throw away? What are the chances? But they’ve happened to me. I bet they have happened to you, or maybe you know someone who has talked their experiences anecdotally at a party or over coffee.

What’s the most difficult part of writing and why?

Okay, well let’s get down to brass tacks. Finding time and that difficult word: Marketing! For me it’s a real issue unless you are a natural born salesperson, which I am not. Some people can sell snow to the Inuit’s!  I’ve never been good at bragging about myself, and that’s what it feels like. Selling my brand, telling everyone I’m great, my books are great. Go out and buy my book. Really, that’s not me. I’m shy enough as it is! But that would be wonderful if you did buy my book. Thank you.

Marketing can also be expensive, not only in time but money, and of course it stops me doing what I love to do most. Writing stories.

My sincere thanks go to every reader who has or is considering buying my book.  Without you lovely readers, writers wouldn’t be needed. So, thank you from the very bottom of my heart.

Reviews are brilliant. They tell a story. I learn from that and thank them for their valuable time and effort and those who share their kind thoughts in other ways.

I also blog. I offer simple writing suggestions for budding authors and share what I’ve learned along the way.

I offer to host authors, new and experienced to give my readers a chance to see who else is out there and share their thoughts.

If there’s anything else I think might be of interest, I post again on social media. And I get a real buzz to hear back from them. However, here comes an apology with regard to my blog. www.wifeinthewest.com because I have temporarily stopped responding to my readership. Why? Because unfortunately I have had over a 1000 scams/trolls ruining perfectly good dialogue my readers, with genuine questions. I take hours to read through messages to weed out the good from the bad. I’ve begun with a clean-up program, hopefully that will resolve the issue.

Oh, and I’ve also recently listed my recent up to date program on my blog so readers knew what is available, rather than them having to trawl through every post.

Kathleen Gray is our central character of The Twenty-One-Year Contract. Kate, as she is now known, agreed I could ask her a question for this blog. I think I floored her when I did. It was difficult for her I have to admit.

“In a nutshell Kate, why did you run away?” Kate gave me such a look.

“In a nutshell?” Her eyes watered, I felt guilty for asking, but she plowed on ever the determined character she is. “I think you know the answer to that, but honestly, I wanted to find my birth mother. But then of course there was Uncle Jack. I absolutely adore him.  Since my parents died… he had to take care of me… I knew he needed to get on with his own life. He needed to settle down, get married, have a family of his own. He couldn’t do that with me hanging around.”

Dorian Craddock is a secondary character in The Twenty-One-Year Contract. She’s pure evil, but in my opinion, she shines out as one of those people you love to hate. I thought I’d push one of her buttons to get a response.

“Dorian, I think you owe an answer to our readers as to why you feel the need to be so mean to so many people.” I handed her the mic. And started typing furiously.

“I owe the readers an answer, do I? Seriously? Who do you think you are, pushing me about, asking me to tell the readers about my business? Really, I’m mean? Besides, you know full well Harriet and Kate got everything they deserved! It could have been so much worse.” She gave me one of those sly smiles.  “Read the dialogue, read between the lines. You wrote it. I’m owed plenty, as you well know, and I’m going to get what I deserve.”

(Little does she know!)

Tagline: Only a simple shoebox, but full of secrets…

Blurb: Kathleen Gray—talented, a little wild, at times rebellious, but always popular—has a fun, easy life in rural Somerset, with a doting family.

Suddenly, they are gone, everything is changed, and she has only Uncle Jack. Try as he might, he cannot be father and mother to her—he has a business to run and his own life to manage.

Kathleen takes a chance and becomes Kate Westfield, fending for herself in London, with a new life built on her hopes and dreams and new friends. She could hardly have imagined that one of those friends has a shoebox full of answers.

SNIPPET FROM The Twenty-One-Year Contract

‘After a glass of water, Jack made himself a cup of tea and returned to the job in hand. This was going to be much harder than he could ever have imagined. Working deep through the night, Jack methodically sifted through volumes of paperwork until light inched its way through the curtain. Though he felt thoroughly ready for bed, he continued searching, his aim to find at least a smidgen of information about his niece. Randomly tidying up as he went, Jack noticed an encyclopedia oddly extended over one of the top shelves. He tried pushing it back into place. It was jammed. It looked awkward. Pulling it out to check the depth of the book, he found a box file hidden behind. Upon the side panel was one word, capitalized in thick bold lettering: KATHLEEN As the hazy sunlight grew, puzzled, Jack pulled the curtains to lend natural light, took the file off the shelf, sat back in Henry’s chair, and looked inside…’

I’ve been happily married for 46 years and lucky enough to be surrounded by my lovely family. I’m lucky to be a grandmother of 5 and had plans to trek the world when we retired. But that was put on hold for good reason. We were in Spain when the invisible big bad wolf arrived (Covid). It changed so many lives,  forever.

Going back in history, I was told I was thick at school. No-one should ever do that, not to anyone. I’ve always had this notion I wanted teach and write, and I did, even though I came out of school with nothing. Just goes to show if I can do it anyone can!

Potted history: Married, two children and did a wide range of jobs: from cleaner, to barmaid, to secretary, to social worker and eventually got my certificates and became a lecturer. Nothing stopped me writing though. It’s a passion. I always wrote around the full-time paid job. Well, the bills don’t pay themselves do they?

When I eventually retired, my husband and I decided to travel.  I still didn’t have the confidence to submit my work. If it hadn’t been for a a couple of good friends and my husband with a: ‘do it before you pop your clogs mate,’ I don’t think I ever would have been in this wonderful position now. I couldn’t believe it when I was offered the contract! Pinch me!

Reviews can be found on Amazon, Waterstones, Barnes & Noble, Bookbub, Goodreads, and the books can be ordered at all good book stores near you.

5.0 out of 5 stars VINE VOICE: A poignant, disturbing and heart-warming page-turner 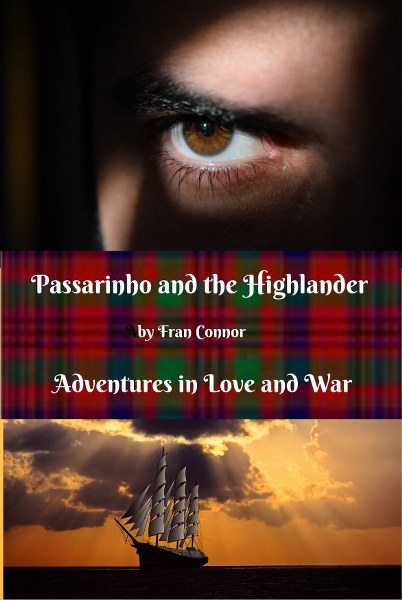 Passarinho and the Highlander:
Adventures in Love and War
by Fran Connor
Genre: Historical Romantic Adventure

A privileged young woman in 1730s Boston sets out on an adventure to rescue her father from a debtor’s prison in Jamaica. A dashing Scottish soldier offers to help her in return for her help in exposing a traitor.
Shipwreck, spies, murder, war and a rival for the Highlander’s affections combine to thwart her mission.
She finds the darker side of life in the Caribbean is a far cry from her sheltered upbringing. To survive and succeed in her rescue she must adapt and, on the way, she discovers a secret about herself that could have disastrous consequences for her future.
Buy or download now through Kindle Unlimited and enjoy this gripping Romantic Adventure with a flawed heroine.
Goodreads * Amazon

I live in SW France for the lifestyle after a career in a UK Police Force. I have six published novels, three more in the pipeline and six plays that have been produced on stage. My screenplays portfolio contains seven feature length scripts with one about to go into production.
I write mainly Historical Fiction but I do other genres too. I don’t do cop stories, I had enough of the real thing.
Website * Facebook * Twitter * Bookbub * Amazon * Goodreads